Louisville, KY – January 12, 2020 – Crappie anglers from several states traveled to the Harris Chain of Lakes at Tavares, FL to participate in the January 11, 2020 Crappie USA (CUSA) event. Bass Pro Shops and Cabela’s presented the tournament for local and traveling anglers. Competitors were vying for cash, prizes, and an opportunity to compete at the 2020 CUSA Classic which will feature a guaranteed payout of $125,000 in cash and prizes.

High winds greeted Crappie USA anglers for their third trip to Florida in the young 2020 season. The temperatures settled in the high 70’s while the water temps registered 64 degrees. Those are normally good numbers for crappie fishing, but challenging winds out of the SE at 15 to 20 added another element to the days fishing. Otherwise, it was another beautiful Florida day.

“We have caught so many crappie while here practicing for the tournament,” said tournament participant Jim Carmen. “It is truly a fantastic fishery.”

A total of 16 boats fished the Harris Chain event—5 in the Pro Division and 11 in the Amateur Division. A total of $4,450 was distributed to the winners.

The top spot on the Harris Chain of Lakes went to George Parker from Okeechobee, FL, and Tim Eberly from Fort Lauderdale, FL. They teamed up to bring 8.76 pounds to the scales and earn the first-place check of $1,400.

The Florida team fished the upper part and east side of Lake Dora where they shot docks for a while before switching to spider rigging. The team caught more than 70 fish on the day.

“We  caught four of our fish of docks in 7 foot of water,” reported Eberly. “We used 1/32-ounce Crappie Stingers with black and white heads and a yellow tail.”

“We caught our other three weigh-in fish pushing Skipper’s ice jigs,” continued Eberly. “We found spawning fish in a cove in 3-4 feet of water. Needless to say, the fishing was tough due to the twenty mile per hour winds.”

The runner up spot in the Pro Division went to Stephen Durden from Umatilla, FL, and Larry Durden from Tavares FL with a bat that weighed 8.55 pounds and included the second big fish of the tournament. They earned a check for $600 and added $115 for second big fish.

The team of brothers used two of the Harris Chain lakes to claim their spot. They fished lake Dora pushing live bait. They used double minnow rigs with a 3/4-ounce weight in 8 to 10 feet of water to catch more than 30 fish on the day. As the wind increased it pushed them off of Dora and they finished their day on Lake Carlton.

The third spot went to Jim Carman and Sharla Fondaw from Fruitland Park, FL. Their bag of 8.23 pounds earned them a check for $400.

Carman and Fondaw spider-rigged in Lake Eustis where they pushed handmade Moon and “B” jigs in pink and bright yellow. They used very light jigs so they would fall slowly. The team tipped with minnows to catch more than 60 crappies on the day.

First place went to Jamie Logan from Ellaville, GA, and Steve DeHart from Oakman, GA. They had a seven fish limit that weighed 8.86 pounds to earn a check for $700.

The Georgia team fished Lake Dora to catch more than 50 fish on the day. They were shooting docks to claim the top spot in the Amateur Division.

“We fished the boat docks on NE side of the lake,” reported Logan. “We were targeting the docks that had 5- to 6-feet of water underneath them. The 1/16- and 1/32-ounce Grandpa hair jig in white was the key. The bigger fish were underneath the docks hitting the jig on the drop.”

“We also caught fish on Skipper’s Jigs,” continued Logan. “Again, the white colored bodies worked the best. We caught more than 25 crappie that were over one pound out of the 50 to 60 we caught on the day. The wind actually helped up by blowing the boat into the docks where we let the jig drop slowly.”

Check out Fishing with Stealth Rod Holders on Facebook for more information. You can view a video of the team prefishing and see the fishing methods that they used.

Youngstown, OH angler Robert Denen fished solo to claim the runner-up spot in the Amateur Division. He had a bag of 7.83 pounds to earn a check for $300. His weight included the Big Fish of the tournament to add $260 and he added another $125 for the  Ranger cup bonus.

Denen fished Lake Harris close to Dead River. He was spider rigging in 8 to 10 foot of water targeting humps with grass on them. He pushed double minnow rigs to catch about 60 crappie. His Big Fish slab weighed 1.65 pounds.

The third spot went to Evan and Stephen Dallas from Florence KY. Team Dallas weighed a seven fish limit of 7.61 pounds to earn $200.

The Kentucky team pushed Crappie Magnet Jigs on Lake Dora. White/chartreuse jigs in 4 to 6 foot of water helped them catch a total of 60 fish for the day.

Darrell Van Vactor, CUSA Operations Manager, sent special thanks to Cheri and Bob with the city of Tavares, Florida for hosting the event.

“What a great job Tavares has done with their City Park property on the banks of Lake Dora,” Van Vactor said. “They have so many amenities in a beautiful setting for folks of all ages to enjoy while visiting downtown Tavares.”

The CUSA Classic Championship will be held October 22 – 24, 2020 at Green River Lake, Columbia, KY. The 2020 Classic, presented by Bass Pro Shops and Cabela’s, features a guaranteed payout of $125,000 in cash and prizes. 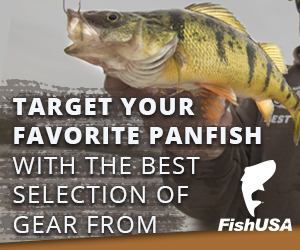 Louisville, KY – May 19, 2019 – Crappie anglers from several states traveled to Monroe Lake, Bloomington, IN to participate in a Crappie USA (CUSA)

© WWW.THENATIONALANGLER.COM, 2016-2021. UNAUTHORIZED USE AND/OR DUPLICATION OF THIS MATERIAL WITHOUT EXPRESS AND WRITTEN PERMISSION FROM THIS SITE’S AUTHOR AND/OR OWNER IS STRICTLY PROHIBITED. EXCERPTS AND LINKS MAY BE USED, PROVIDED THAT FULL AND CLEAR CREDIT IS GIVEN TO WWW.THENATIONALANGLER.COM WITH APPROPRIATE AND SPECIFIC DIRECTION TO THE ORIGINAL CONTENT.© SWIMBAIT MAYHEM//© SNAKEHEAD MAYHEM//© SEMPERFISH//© HOOKEDAFFISHING//© ANGLERMISSIONTEAM